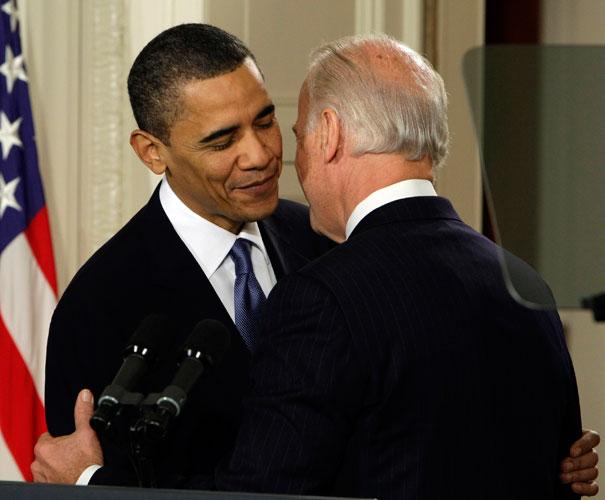 A few days ago Joe Biden whispered the “F” word into Obama’s ear during a press conference and the microphones picked it up. The press has been playing the clip ever since, mostly as a tongue-in-cheek news story.

No one seems surprised that Biden would use this kind of language, including me, just a little shocked that he would do so while the whole world was watching. Is it a staggering lack of judgment on Biden’s part, or simply the result of a man who is so accustomed to foul language that he no longer notices he’s using it? I’m going with the latter.

I’m not sure many people see Biden as a role model, even though he is the second-most powerful man on the planet. Most see him as just another narcissist personality who was lucky enough to stumble into a career that feeds his ego—not unlike most politicians. But still, it seems sad that so many children had to witness it, along with the jokes and giggles from the press afterward. This kind of language has become so commonplace today that people aren’t even shocked by it anymore—and that’s what really breaks my heart.

I subscribe to a number of blogs, and Biden’s gaff has been the topic of conversation on many of them the last few days. Not surprisingly, most people don’t seem to think it’s that big of a deal. A lot of the blogs I frequent are Christian oriented, and Christian teens make most of the comments. Quite honestly, I’m a little stunned by how few of them were offended by Biden’s language. “Times have changed, and most people don’t see much harm in that kind of cursing these days,” seemed to be the general consensus. Many of the Christian teens admitted to using the “F” word themselves, usually in conversations with their friends, though they would never do so around their parents. One teen wrote, “It’s not like I’m taking the Lord’s name in vain or anything…”

It made me wonder, Is that really true? How is it not shameful and degrading to the Lord’s name when a follower of Christ uses crude and obscene language? And how exactly is that not taking his name in vain?

I’m not a religious prude, advocating a return to the puritan lifestyle. And I’m not so old that I don’t remember what it’s like to be a young person struggling with peer pressure. I know it’s tough being a Christian teen in the middle of an increasingly secular world. Being an adult these days isn’t much easier. But isn’t this one area of our faith where Christians just can’t afford to compromise? Can’t we admit that using foul and obscene language is such an insult to the name of Jesus that it’s simply wrong to try and justify it? Using careless and unwholesome talk is a sin, pure and simple, and not because this old fuddy-dud of a blogger said it was—but because God’s Word tells us it is.

Paul said in Ephesians, “But among you there must not be even a hint of sexual immorality, or of any kind of impurity,… because these are improper for God’s holy people. Nor should there be obscenity, foolish talk or coarse joking, which are out of place… Have nothing to do with the fruitless deeds of darkness, but rather expose them. For it is shameful even to mention what the disobedient do in secret.” (Eph. 5:3-12)

I’m pretty certain Biden’s flippant language qualifies as impure, improper, obscene, foolish, and coarse. That’s not a cultural thing—not in the eyes of God—so can we please stop calling it that?

I’d like to issue a challenge to every Christian reading this post—especially young people. No, not a challenge, a plea—a gut-wrenching appeal from the depths of my spirit. Not because it’s late and I’m an over-reactive 50-year-old, but because this is a matter of conviction that God has been burning into my heart and mind. Pledge with me today to make this your line-in-the-sand commitment to God—to decide once and for all that when it comes to maintaining purity of heart, mind and speech, you will not allow yourself to give in to peer pressure or “societal norms.” Commit in your heart to honor God with your speech—both in private and public. Promise God that no matter how many of your friends choose to use crude and obscene language, that you will not join in. Pledge to be a light for Christ in the world, not another embarrassing sell-out, just trying to be “cool” in front of your friends.

There is a reason God calls Christians to “rise up and be separate.” Because how we think and act has a direct impact on state of our hearts. More than that, it reflects directly on God, and says volumes about the seriousness of our faith.

Luke tells us, “out of the heart the mouth speaks.” If the language coming out of your mouth is course and crude and impure, then maybe it’s time to take a good look into the contents of your heart.

How can we possibly have an impact on an impure and ungodly world if we ourselves can’t commit to pure and holy living?

Thanks for letting me rant.